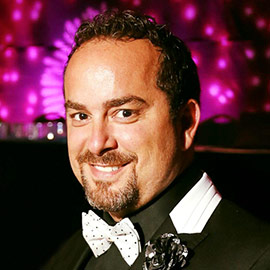 Tommy DiTommaso began dancing at the age of 11, under the tutelage of ten time US T10-Dance Champion, Mr. Larry Silver. His secondary coaches were no less legendary, including Alex Lazo, a two time US 9-Dance Champion, Jean Marc Generoux & Franze Mousoux, five time Canadian Latin Champions and 5 time Canadian 10-Dance Champions, Rufus Dustin, a US Theatrical Champion and US Smooth/Rhythm/Latin Champion, Michelle Mason, a US Broom Champion, David Hamilton, a US Smooth Champion, and Bob Powers, a US Rhythm Champion. With Tommy’s natural talent and unparalleled work ethic, he quickly moved his way up in the ballroom world.

Mr. DiTommaso made a name for himself, winning the following Championships and Titles:

These are but a few of the multitudes of awards Mr. DiTommaso has accrued over the years.