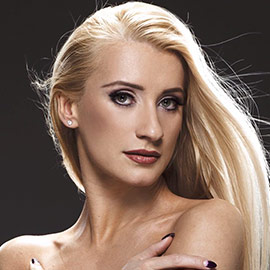 Katusha was born in Moscow, Russia. At the age of 7 her father took her to the local community centre for ballroom dancing lessons. He also enrolled her in figure skating. Doing both activities was hard for Katusha and she decided that she needed to pick one or the other. She soon realized that dancing was her passion; and that to be successful she needed to narrow her focus and put all her efforts into dance. Turning professional made sense to her even at the young age of 16. She then began to compete standard with her teacher as a professional dancer.

Shortly, after turning professional and competing all around the world; Katusha found herself heading to America to further her career with new and exciting opportunities. Upon arriving in New York City she was quickly paired with Jonathan Wilkins. Together they danced for 12 years competing around the world in all major Ballroom Dance competitions. After winning the 10th United States ballroom dance championships Katusha and Jonathon decided to end their partnership.

Arunas & Katusha started dancing together in October 2007. Their couple immediately became an unstoppable force. After only one month together Katusha and Arunas swept the Ohio Star Ball championships, and then two months later participated in the United Kingdom Open Championships where they placed second among all the best dancers in the world. It was unbelievable result, which came as a surprise to many people, including Arunas and Katusha, who worked very hard preparing for this championships, but didn’t expect to be awarded such high placing. In the year 2008 they became established at the top of Professional Ballroom Dancing World by placing second in all major competitions. It was incredible rise, but even greater success was destined for them next year. Arunas & Katusha won their first World Championships title in September, 2009, after dancing together for less than two years! They were thrilled to reach this pinnacle of the competitive dancing, but at the same time they felt that they still had a lot to offer and they continue working on improving their dancing, so that their performances bring even more joy and excitement for the audience. Arunas and Katusha are also reigning International, UK and British Professional Ballroom Champions.