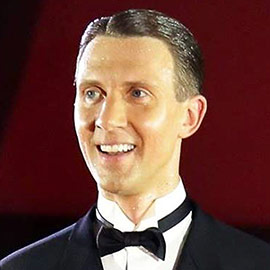 Arunas was born in Vilnius, Lithuania. He started dancing when he was 7 years old. His mother loved Ballroom Dancing and so she took him to his first dance classes, which began as an after school activity. Arunas, as a young boy, tried many different sports like football, basketball and swimming, but it was the dancing that he eventually decided to stay with.

Arunas started dancing with Edita Daniute at the age of 13 and had very successful career in juniors, youth and amateurs. They made their first finals in the European and World Amateur Championships when Arunas was only 19 years old. After becoming World Amateur Champions, as well as winning European, International, UK and British Championships, Arunas and Edita ended their partnership.

Before contacting Katusha, Arunas took some time off from competitive dancing and had some time to relax and rethink what he wanted to do. It was nice to have holidays, and do things which he didn’t have much time to do because of the intense schedule when competing. But after few months like that, he started missing competitions and after a lot of considerations, he decided to ask Katusha to dance with him. She accepted his offer, and a very successful partnership was formed.